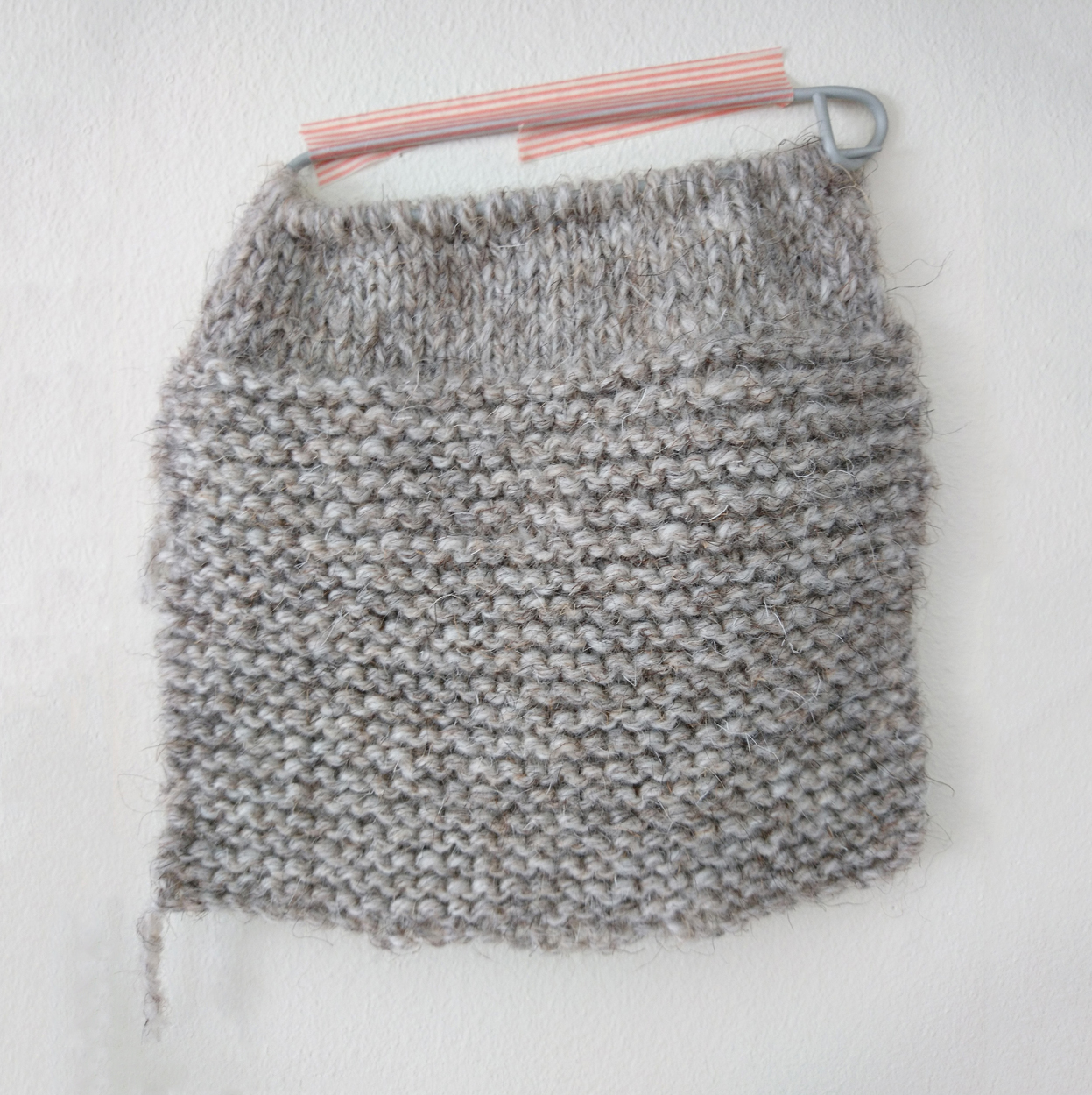 I was born in Wrexham in 1969, the same year mankind made one giant leap on the moon and raised at my family home in Gresford, North Wales.

Gresford is a small Welsh village that remains close to my heart. Its church bell’s are one of the seven wonders of Wales. As a young boy I learned to ring them, being careful to let the ascending rope run freely through my hands, as holding on would elevate you somewhere up into the bell tower.

It was here in Gresford my creative inclinations began, learning to hand knit at 8 years of age. My first creations being humble peggy squares. I eventually progressed from plain stitch to purl. These were made in a New Zealand wool, hand-spun by my kiwi mum on her wooden Ashford spinning wheel. The wool bales had travelled 11,337 miles from mum’s family farm, ‘Ngaputahi Station’ located in the beautiful Pohangina valley.

I found this transformation from fluffy bale, to fine yarn, to knitted sample fascinating and it inspired me to design and make my first 3D object. Mum suggested something functional that our tea drinking family would benefit from. A Tea Cosy. I created it in pearl stitch with a striped design, using undyed natural wool colours.  It felt a magical thing to do. It was the first object I had created with my own hands, with mum sharing her knowledge and encouraging me.

From these humble beginnings, I’d unknowingly sowed the seeds for a career in design. With hindsight I see how that tea cosy provided me with a critical design education aligned to the Bauhaus School of form and function. Its form being created to fit the tea pot, with slit holes for the handle and another for the spout to pour the tea and its function, being made in an insulating wool, to keep the tea warm in the teapot. A simple holistic design philosophy that would help guide my career.

After completing an Art foundation in Wrexham, North Wales, I pursued my fashion studies at Bournemouth College of Art & Design. This was during the early 1990’s, a time of great social change in Britain. Buoyed by the vibrant music industry, it was an exciting era to be studying art and design at college. Being passionate about clothing as a form of identity, I wrote a thesis on ‘Uniforms’ which I developed into a photographic collaboration with fellow art student Wolfgang Tillmans. Wolfgang’s stardom would rocket, going on to become a global acclaimed photographer after winning the Turner Prize.

During this period I met my future wife Marta Narbona who hailed from Valencia, Spain and who was also studying fashion. When Marta’s sister had a baby girl Patricia Ferran, she became the first newborn baby I held in my arms. I didn’t realise back then her desire to perform around the breakfast table at a very young age – finding myself part of her first audience – would one day lead to Patsy winning the Laurence Olivier’s actress of the Year in 2019.

After graduating from Bournemouth my ambition steered me towards the Royal College of Art in 1992, hoping to gain an MA in Fashion Menswear – the only postgraduate degree course in Menswear in the world at that time, offering just 7 places. I remember trudging on foot through two feet of snow, dropping my black portfolio off at a Georgian building on Queen St, in Kensington. As the large wooden doors opened I saw a vision of thousands of similar black portfolios stacked up in a room with a large vaulted ceiling and my heart quickly sunk.

Luckily I got in. Wolfgang’s photographs had given my portfolio a special set of wings.

Under the more intense spotlight of the RCA, I found himself oscillating in elevated fashion circles, with some of the world’s famous designers such as Jean Paul Gaultier and John Galliano popping in and out of our class. On my last day of graduation, when a tutor discovered I was Welsh, she left on my desk a poster titled ‘Welsh Fashion Awards’ with a £3,000 prize fund, which I quickly realised amounted to my student overdraft. It led to me showing my RCA graduate collection at the inaugural awards at the Savoy Hotel, London.

The following year I entered the completion again which I won, becoming the ‘Welsh Fashion Designer of The Year’. The awards judges were chaired by David Emanuel, well known for designing Princess Diana’s wedding dress, along with  Shakira Caine, wife of actor Michael and Caroline Collis, the daughter of Joan Burstein (Mrs B) who co-founded Browns of South Molton St.

While receiving my prize on the catwalk I was asked by the host, TV presenter Jeff Banks, “Are you Ossie Clark’s secret love child?” This humorous encounter lead to me being filmed by the BBC for their populist programme ‘The Clothes Show’, a show which regularly attracted 8 million viewers and presented by Jeff.

The nationwide exposure I gained from becoming the Welsh Fashion Designer of The Year led to me being invited, along with Philip Tracy, to represent the British Fashion Industry at a prestigious promotional event ‘Action Japan’ held at the British Embassy in Tokyo, 1995. A Department of Trade & Industry funded the event. This exposure inspired the president of Sanyo Shokai (Burberry’s licensing partner) to make an approach to license the Toby Clark label in Japan. It was quite an honour being a designer just 6 months out of college.

The increased interest in my designs helped establish my own label TOBY CLARK, which I sold to leading stores around the world. Notably the Bursteins, owners of Browns of London, the Pressmans, owners of Barneys New York, Tom Marotta, the Vice President of Saks 5th Avenue, Sam Sugure the president of Anglobal, Japan, Angela Quantrell, fashion director of Liberty of London and Shinsegae of Korea, who advised the Toby Clark label was the number #3 best seller behind Jil Sander and Romeo Gigli. Suzy Menkes fashion editor of The Herald Tribune coined my label as ‘tailoring with a light hand’ in her London Fashion Week round up.

My RCA graduate collection had been inspired by School uniforms, which would prompt a 6 page editorial on ‘School Fashion’ in the launch edition of Arena Homme Plus+ which went on to become an influential style magazine around the world. This school fashion editorial was styled by David Bradshaw and photographed by Paolo Roversi. This was quite mind blowing as a young designer as Paolo was an idol of mine.

In 1997 for the launch of launch of London Fashion Week, the Daily Telegraph’s Fashion Editor Hilary Alexander, featured a full page editorial on the Toby Clark label . The article proclaimed me as ‘the new Jean Muir’. I found it quite unsettling as during the interview Hilary had told me everyones saying it and such a comparison would be the death of me. The team at Jean Muir were understandably not happy either, as Jean, an icon of British fashion had sadly died a few months earlier. I quickly learned from Hilary that some journalists see ‘the story’ and their newspaper sales as more important than the individuals they exploit.

Following this period I founded the design consultancy Clark & Narbona with my Spanish wife Marta. My first project was an invitation by Roger Saul the founder of Mulberry to help relaunch Mulberry menswear at Pitti Uomo, Florence. This proved a stimulating challenge.

At the start of the millennium and having always admired Margaret Howell, I was fortunate to receive an opportunity to be appointed Margaret’s head mens designer. I spent 12 years with Margaret helping her establish the Mens division as an international brand. At that time the total group revenue was around £70M a year, with 10% generated in Europe and 90% in Japan.  The MH company being owned by Anglobal Ltd, a division of Sanei-International Co Ltd. with TSI Holdings the parent company.

My creative steer on Margaret Howell’s Menswear would lead to MH receiving three nominations at the British Fashion Awards for Menswear Designer Of The Year. This period included projects for the Japanese company MUJI and designing the Uniform for the V&A Museum in South Kensington. During my time designing for Margaret, I was interviewed by Alain De Botton for his book titled ‘The Pleasures and Sorrows of Work’. This was an interesting experience as Alain seemed as interested in my thoughts of the human figure without clothing, as my articulation of the importance of the shape and cut of a collar on a man’s shirt.

At Margaret Howell I met my current fiancé Maree Ballantine a New Zealander and I then re-branded my design company to Toby etc.

Following my period at Margaret Howell I was approached to become a co-Founder of Blackhorse Lane Ateliers. This remains the first and only Factory brand in London making selvedge denim. With a circular approach we developed a local allotment to grow Japanese indigo plants. The founding methodology incorporated a factory space with chefs, weavers, dyers, leather makers and emerging craftsmen as part of a holistic community-focused enterprise. It was considered by industry opinion formers to be a game changer for manufacturing in Britain.

Around 2015, I started to consult for a small cashmere company in New Zealand who farm their own exclusive breed of cashmere goats, with a little knitting factory nestled under the coastal hills, where the goats freely roam. Having worked extensively in industry, within large global supply chains, I felt attracted to this small single source brand who could grow their own materials within their own locality.

In 2020, during the outbreak of the global pandemic ‘covid-19’, I sensed a moment for change in the world and I started to outwardly reject clothing consumerism. For environmental reasons, I started wearing the same clothes every day. I carefully observed each item as it changed state and eventually wore out and I then patch repaired the broken fibres. This Same Clothes Everyday became a personal manifesto and a project admired by Lidewij Edelkoort who invited me to be an ambassador for her World Hope Forum.

As a small lagniappe to thank you for reading my biography, here is a link to one of my favourite songs when I was a teenager, back in the glorious 1980’s.

Souvenir, Orchestral Manœuvres In The Dark